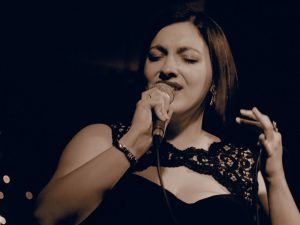 “Pazzano shines throughout with energy and luscious tone, as she soars with her quartet. Pazzano possesses a gorgeous, classically trained contralto voice capable of projecting the full gamut of emotions, as well as an uncanny skill with rendering the lyrics of current music, jazz standards and show tunes.”

With an Honours B.A in Arts (Music) from University of Waterloo and a BEd from OISE/UT, for the past decade, Mary-Catherine has been working steadily as a performer, freelance vocalist, music educator, vocal coach, and music director. Performance highlights include the American debut of Songs for My Mother Off-Broadway at Symphony Space (NYC), jazz performances at the iconic Birdland Jazz Club (NYC), and headliner at: Uptown Waterloo Jazz Festival, Jazz Bistro (Toronto), The Rex (Toronto), The Jazz Room (Waterloo), and The Registry Theatre (Kitchener). She has also toured New Zealand as a performer and workshop leader, and has been a featured soloist with the Kitchener-Waterloo Symphony. Mary-Catherine has been lucky to share the stage with jazz notables including Billy Stritch, Mark Eisenman, and, classically, the world-renowned Penderecki String Quartet.

When Mary-Catherine isn’t performing, she is committed to using her performance experience in an educational capacity. She is Founder and Artistic Director of Jazz in the Schools, a program dedicated to bringing music education to high school students in need of a creative outlet. She also founded and directs Jazz for Adults, a program designed for older adults to realize their passion for singing and playing jazz in a collaborative, encouraging atmosphere. Mary-Catherine is also Music Director at Knox Church in the heart of Uptown Waterloo and the new Music Director for the Waterloo Regional Police Chorus.

Mary-Catherine released her studio album, “You’re Gonna Hear From Me” on October 27, 2017, on the label Glorious Feeling Records. The record was deemed as “an excellent debut” (Jazz historian Scott Yanow). The album contains original songs, material from the Great American Songbook, and lesser known jazz standards. The album has received radio airplay on JazzFM, CBC, community and commercial radio stations across Ontario, Québec, British Columbia, Saskatchewan, and nationally syndicated U.S. shows in Florida, California, and Minnesota. Songs from the album have also been added to CBC’s worldwide Jazz Songbook Stream on cbcmusic.ca. The album received a rave review in the December issue of The WholeNote Magazine. Her second album, “Christmas: Live at The Jazz Room”, will be released in November 2022.

Finally, Mary-Catherine is also a freelance vocalist, and has been featured on multiple recording projects, including: “Intrinsic Value” (2016), “Songs for My Mother” (2018), “Earth Anthems” (2020), and “Poland Parables” (2021). All recordings are available on digital platforms.